Specializing in Development Studies at Oxford

After studying mathematics for one year in Italy, Laura realized she was missing something. Although she was really enjoying it, she was looking for a more interdisciplinary programme. That is when she discovered PPE at VU Amsterdam. “I was very convinced about the programme, but I didn’t really know the country, city, anything. I came to Amsterdam and I completely fell in love: with the place, the people, my programme. I had the best three years of my life. I met the most incredible people and I am still so attached to them. If I look back, it is my home, the country I would like to be some time.”

Her current Master’s in Development Studies is also interdisciplinary, but many of Laura’s peers have a monodisciplinary background. “So what I realized, what makes me different from a lot of other people, is really my capacity to connect subjects that seem to have nothing in common. I noticed that I take it for granted, because obviously all my friends from PPE had the same. Everyone was very critical and able to draw from different subjects, but then I came here where there are people who come from one discipline and I realized how unique it is. This ability of not limiting yourself to one perspective, but also being open to embrace other ones.”

Finding your own path

Since a young age, Laura had already been very passionate about conflict studies and developing countries. The PPE course on International Development reignited this passion. After her exchange in China, she was certain that a Master’s in Development Studies was the right way forward. “I think that living in China and experiencing first hand the coexistence between 'developing and 'developed' realities was very eye-opening for me, so I just wanted to learn more. Most courses I took at Fudan University were in Development Economics, so it was kind of a preparation for what I was gonna do here at Oxford.“ As part of her two-year Master’s, Laura plans on doing research on Kenyan entrepreneurs, work she would like to continue in a PhD setting. And afterwards? “In my future, I would like to work as a journalist, focussed on war and conflict. That’s what I have been wanting to do for the last three or four years and that hasn’t changed, so war journalism is still the field I would like to specialize in.”

The name itself is already quite daunting, so what was it like to apply for a programme at Oxford? “Honestly, if people wouldn’t have told me to try, I would have never done it. The only reason I applied was because some of the PPE professors said: you should definitely try, you should be a little bit more confident. I thought it was impossible, I didn’t even consider it a possibility. But that’s what’s great about PPE: it’s a programme that does give you the possibility to go to any university in the world. The advice I would give to other students is to just try, to not be scared away.” 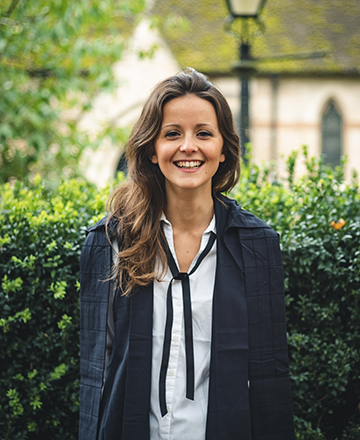 “I realized how unique it is. This ability of not limiting yourself to one perspective, but also being open to embrace other ones.”